In a previous post Youth Odyssey revealed our new partnership with Majesty Outdoors, a local nonprofit that uses hunting and fishing trips to connect with fatherless youth and showcases their adventures via a television show called Majesty Outdoors Television. We settled on the partnership due to having overlapping demographics in our organizations and agreed that by combining our efforts we could increase the depth of connections we create with our youth.Majesty Outdoors approached us to see if we had youth in our programs that may be interested and benefit from attending a hunting trip for a weekend. After going over options that we had in mind, Majesty Outdoors chose to select one of our youth mentors, Chris,  to join them and be filmed for their television series while gaining some great personal experiences along the way. I was able to talk to Chris about his time with Majesty Outdoors to get a better perspective of how the process works.

Chris showing some of his new duds with Becky Meyer

According to Chris, when he found out about being selected to be a part of Majesty Outdoors he was excited but “thought it was going to be a program more like Youth Odyssey” where it was “more group based rather than just one on one.” Chris didn’t realize it was going to be just him until he arrived at Cavender’s Boot City and there were no other kids there but him. The reason for meeting at Cavender’s was to outfit Chris in some essentials like dress shirts, jeans, a jacket, vest, a belt and a pair of boots. Bill Blodgett, the founder of Majesty Outdoors, was walking through the process with Chris so he wouldn’t feel too overwhelmed and giving out free fashion advice to Chris on things he thought would look good on him and how the items he was selecting can come in handy in the future as well as on their upcoming trip. Once they left Cavender’s, Chris, Bill and his wife, Cody (the camera man) and Becky (Youth Odyssey’s Executive Director) went to get something to eat before heading out to their weekend destination at Covenant Ranch in Freer, Texas. 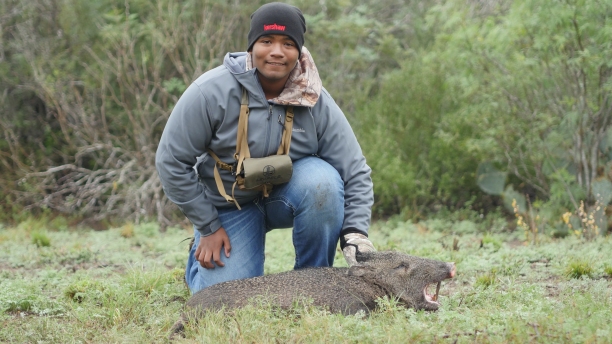 They arrived at the ranch that evening and met with the guide and owners of the ranch before settling in and headed to bed. In the morning, the crew took a guide out and scouted the area while Chris and Susan, Bill’s wife, waited around for shooting practice because that evening they planned a night hunt. The first hunt didn’t prove fruitful but there was enough activity that they felt they’d get something before the weekend was up. The next morning, Saturday, everyone was up and functioning, ready for a hunt at 5:30am! It was cold and there wasn’t too much activity but since they had gotten up early they stayed pretty low key in the afternoon. They hung around the lodge and toured around the area until it was time to get back to it and have another evening hunt. This time they went “high racking,” which Chris told me was “a vehicle with a rack on the top, similar to a canopy, so you could stand and have a different perspective during the hunt.” They didn’t see any deer but quite a few Javelina’s so they set their sights on those for the evening. Chris, who had never been hunting before, used the opportunity to practice and was able to get one of the Javelina’s. 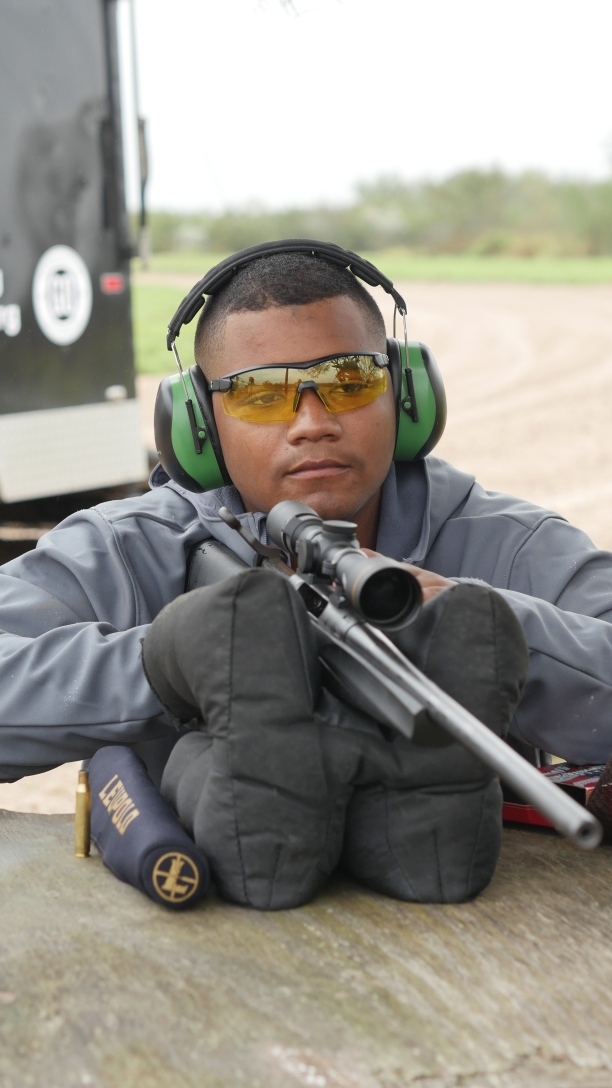 On the final day, they did another morning hunt but this time started at 4am. Chris, who never admits when it’s cold outside, said “it was really cold” so I can only imagine how low the temperature was. He said they “saw a lot of fawns, does and young bucks, but you couldn’t take the shot because there are rules about not shooting the younger bucks.” Chris had informed me that Bill and the rest had named all of the deer, which I found interesting, assuming they were names like Bob or Frank, but I understood what he meant when he recalled his bucks name, Turkey Foot, so named for an odd antler formation on its rack. They had encountered some rain that morning but Bill said that “after it rains and is cold like this they (deer) like to come out and eat and get warmed up.” Sure enough about 5-10 minutes after the rain stopped more deer started coming out, including Turkey Foot. Turkey Foot was positioned behind a tree and that made for an interesting moment where they had to pause so the camera man could to get in place for the perfect shot when Chris was going to take his shot. Eventually, Turkey Foot came out from behind the tree and Chris was able to get off one, clean shot and the buck was down.

Being his first big game hunting experience I was curious how Chris felt about it after the shot was taken. He expressed that he “was shocked and happy.” Apparently Chris had been worrying about hitting the deer in “the right spot so it wouldn’t suffer,” so he was really happy that he had “a good clean shot.” Of course they took pictures with it and it was probably an 8 year old buck or so (that was their guess) and it was 200 pounds and either a 11 or a 12 point (Chris couldn’t recall). Needless to say, I’m sure there will be some jealous hunters out there when they see these pictures. 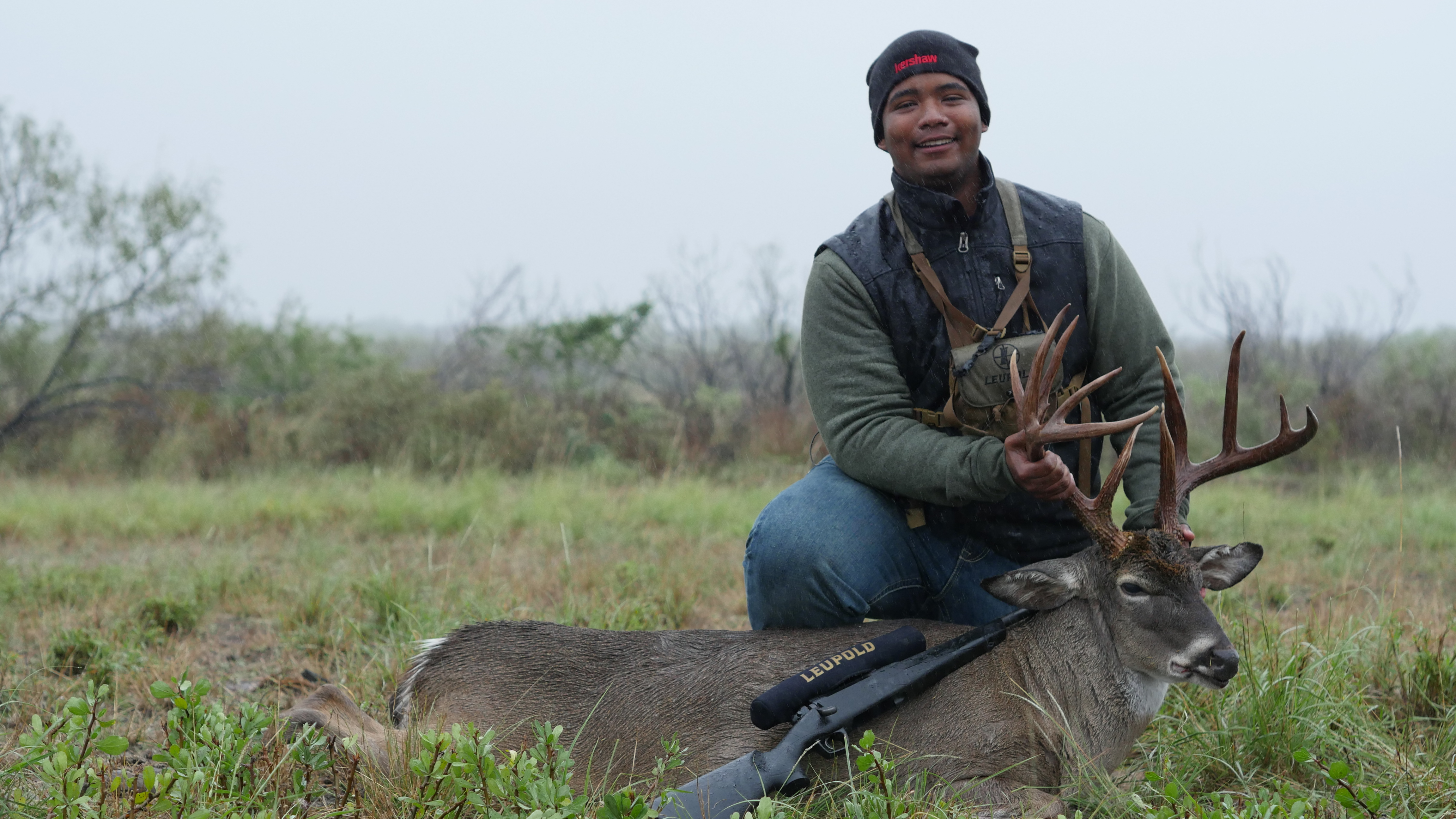 Bill and the guide went ahead and processed the deer letting Chris know that he’d get to keep the meat. With a 200 pound deer that’s a lot of meat so I wondered if Chris had enough freezer space for so much meat. Unfortunately, he doesn’t think he will but he plans to give some to his friends who make jerky and sausage so that should help free up a little space. They also took the deer to a taxidermist and are going to do a shoulder mount of old Turkey Foot and gift it to Chris to hang on the wall of his room.

When I asked Chris about his experience he said that the program “was really good, [he] liked it a lot, it taught [him] a lot of values, and everyone was genuinely nice the whole time.” Chris said it gave him more confidence and helped him understand more on how the ecology aspect came into play. He made sure to note that “patience is key and discipline since you have to stay really still for a long time because the deer can hear your tiniest movements.” That’s what Chris found the most difficult, “having to sit still in the blind and clearing your mind when you were going to take the shot.” Bill told him to “just to breath” and that Chris found that to be helpful advice. 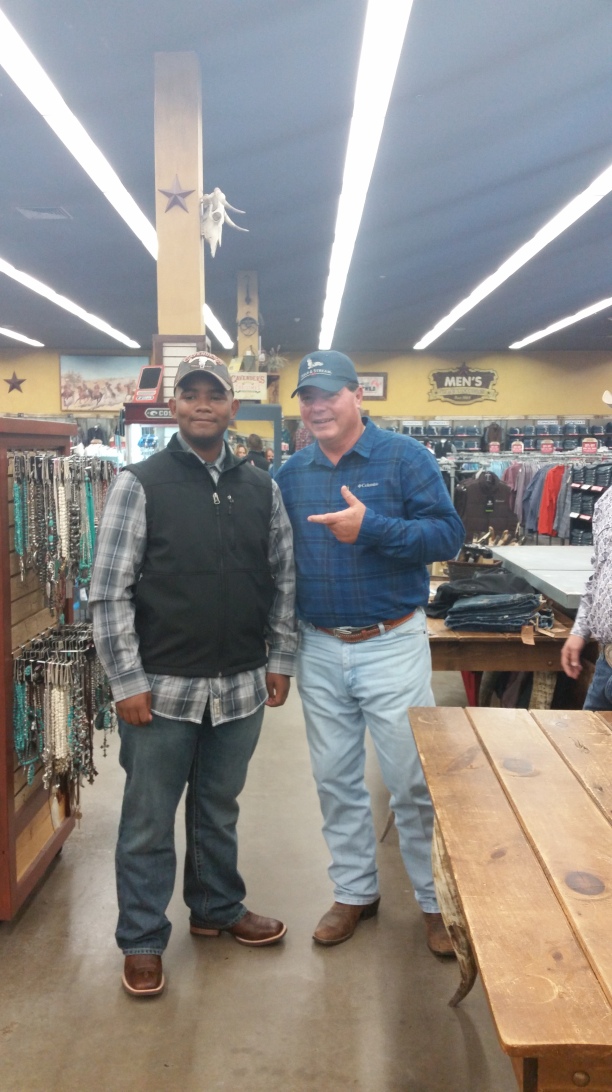 Since, Majesty Outdoors is a Christian based organization so it was no surprise to me when Chris mentioned “it was a very religious experience.” He said that he liked it “because he doesn’t really follow a faith and he wants to look at all of them before choosing one to follow.” Chris said that they would “usually talk about [religion]here and there and do a prayer circle for a good hunt and the ability to instill knowledge about the ecology and other values upon [him].” He said that his favorite part of the trip was the people. “Getting to meet and know them all was cool, they were all really nice.”

When I asked Chris if he’d do it again he “I definitely would. I wouldn’t even have to hunt, I’d just like to go out there and sit with them.” He also wanted to “thank Bill and Majesty Outdoors for giving him such a great experience like they did.” I let Chris know that there were opportunities for him to become a volunteer or mentor with Majesty Outdoors and he got excited stating “that [he] didn’t know that was an option but will look into it.” I hope he does because his Majesty Outdoors experience clearly had a great impact on him and I know he’d make a great mentor and volunteer for anyone else who was going through the same things.

On behalf of Youth Odyssey, I too, would like to thank Bill and Majesty Outdoors for allowing our youth to have these life changing experiences and can’t wait to keep this partnership going!