For the past four years, Youth Odyssey has been partnering up with Homeschoolers Unlimited Texas (HUT).  We help enhance their curriculum through our Adventure Challenge programming, complete with numerous adventures along the way. A typical HUT program spans over the course of the regular school year, and like our school programs, it just come to an end. We had a great year with the kids and there was so much interest that we had to split the group into two programs. One group met from 12-2pm (HUT 1) and the second group met from 2-4pm (HUT 2) at Lindale Park.

For HUT1, most of the kids had been in the Youth Odyssey program before but there were some new faces. Thankfully, they meshed well and the older participants were able to help the newer ones understand the rules of the program and what was expected. Throughout the course of the program, the kids worked together on the six life skills Youth Odyssey teaches and did so politely and enthusiastically. They demonstrated a lot of growth as they worked on improving their skills. We were so happy to see all the returning youth this year, how they applied the lessons we taught, and we cannot wait to see them all again next year.

HUT2 consisted of mostly new faces to our Youth Odyssey program style, but were quick learners. Most of the youth already knew one another (same homeschool group) and tended to interact only with their friends. Our facilitators observed this behavior and worked toward getting the youth out of their comfort zones and into their growth zones.  This was accomplished by switching around the usual groups. Once they were mixed up, there was more cohesion and less cliques present. The attitudes also changed; initially they would get down on themselves for not figuring something out right away but when the program ended they were encouraging their teammates and reevaluating their strategies instead of wanting to give up. I witnessed growth in every participant, new friendships were formed and others were strengthened.

Both HUT programs experienced a full day at the Youth Odyssey ropes course and both groups impressed us with their focus and determination. On our ropes course, we start off with a half-day of low (on the ground) elements that focus on reinforcing the concepts of teamwork, communication, and encouraging others. The second half of the day consists of high (off the ground) elements where the kids push themselves to try new things and face their fears; with the encouragement of the staff and other participants. The high elements can be pretty intimidating to even the most confident of individuals but both of our HUT programs had almost 100% participation in the high elements. The groups kept a positive attitude throughout (even thought the weather wasn’t the best) and were encouraging and supportive of the rest of the group. A successful two days for sure! Here are some highlights from the ropes course: 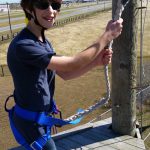 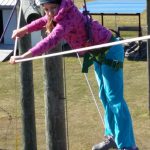 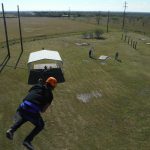 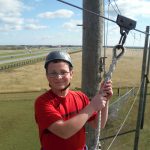 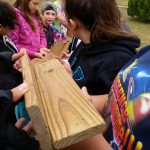 We ended each program with one final adventure; a kayaking day trip. Most of the kids in the HUT 2 program had never been in kayaks before thus,making for an interesting dynamic on the water. After reviewing rules, do’s and don’ts, and making sure they knew how to stop their boat, turn and keep an eye out for dangerous situations we loaded up and headed to the water. Once in the water the group discussed the route and our plan for the day; and then we were off. We had a total of seven kayaks in the water and we staggered one instructor in the front-to lead, one in the middle-to keep the group together, and one in the back-to be able to see everyone and react accordingly if needed. At times it was like herding cats but once they got the hang of it, it was smooth kayaking.

The HUT 1 program went smoothly since many of the kids had already been kayaking with us before. After all of the due diligence we started deploying kayaks into the water. We ended up having six kayaks and only minimal issues navigating the route we chose. Since the group picked up kayaking pretty quickly we reached our destination early. Because of this we decided to test their skills in a competition setting. We hosted a short series of kayak races; the first was who can get to the other side of the river paddling forward and the second was who can reach a certain point first but paddling backwards. It was pretty amusing to say the least but all did well and everyone was in good spirits.

We had a fun and eventful year with our HUT programs and can’t wait to continue our partnership with them next year.

Here are some highlights from our kayaking trips this year: