A quick recap of Part 1 to this blog, I had the pleasure of interviewing Chad, a former Youth Odyssey member from 17 years ago, along with the founder of Youth Odyssey, Kim Cox, who, at the start, was a mentor to the kids and placed himself in all the activities they would do. The interview explained how the programs used to run versus how they are structured now; as well as some funny stories and a lot of reminiscing. When we left off we were talking about trips out to Kim’s ranch where some of Kim’s favorite Youth Odyssey memories come from.

Kim remembers, fondly, taking the kids out to the ranch and driving them around in the bed of the truck to spotlight deer. Chad chimed in and mentioned that one of the fun things about driving in the back of the truck was getting slapped in the face with unseen branches. They would be driving along at night with there heads sticking out and then, out of no where, these branches would appear, causing everyone  to duck down laughing (and some would get scratched up but they didn’t care because “it was a blast”). In the middle of laughing about the story, which Chad acted out for us, there was mention of doing donuts in the fields, which was quickly followed by discussion of “that one time we chased some hogs.” From that point they recalled a trip where it had started raining pretty bad and they went on a recon mission to pick up one of the participants who had taken their bike for a ride down the road. They all piled in the truck and followed the road for a while until a bike came flying into the road. The kid who had been riding it threw it in the road so they could see him. He was upset about the situation but, thankfully, wasn’t hurt (love the cohesiveness that these programs create). One more trip down memory lane was the tale of a kid who was afraid of cows but had somehow managed to get stuck in a field full of cows and was “cornered by three or four cows that where just hanging out.” The boy who was “cornered” was frozen with fear and crying and they had to talk him out of the situation (which is a great example of how Youth Odyssey fosters teamwork and communication skills while taking youth safely out of their comfort zones into their growth zones). Clearly, there are many a tale that could be told about the adventures at Kim’s ranch but I was also curious about what Chad’s fondest memories with Youth Odyssey were and how they have molded him into the successful man he is today.

Chad (circa 2003) with his guitar, Sublime stickers and all

After saying “there were a lot of good memories, we did so much that it’s hard to remember everything,” and reflecting back, Chad mentioned a guy named Wayne who would bring a guitar on the camping trips which led Chad to do the same. On this particular camping trip, Wayne taught him an entire song and then at Pedernales Falls State Park amphitheater they performed for everyone. Chad would play guitar and do some stand up comedy as well. (I found that funny since Chad is now in an improv comedy troupe and does stand up comedy currently). Most of the songs he knows on guitar now he learned while on Youth Odyssey trips. Having his guitar be such a big part of his Youth Odyssey experience, I was curious if he still had it. Chad said he had misplaced his guitar for years but recently found it at an old friends place, “still covered in old ‘Sublime’ stickers.” He remembered how he’d bought it at a pawn shop for $12 and didn’t even know how to play it until the Youth Odyssey trips. He and Kim both took a moment to reminisce about when they all used to just hang out and jam around the campfire together.

While they were reminiscing, I couldn’t help but wonder if Youth Odyssey had been Chad’s first camping experience, since it is for most of the kids we work with today. I decided to ask and, as it turns out, Youth Odyssey was not his first  camping experience. Chad explained that he had gone camping with his mom and stepdad to KOA Campgrounds a few times. They would mostly go and take the boat out on the water instead of “going out and exploring nature [like we do with Youth Odyssey].” Chad mentioned how “camping got better after Youth Odyssey because [he] understood more; like making fires, and appreciating nature.” Kim jumped in at this point saying “everyone should know how to make a fire, it’s a good skill to have.” He remembers teaching kids to build fires, it was “so interesting because they have no concept of how to make a fire and how much is involved in building and keeping it burning.” It allows them to learn a new skill, then put it to the test, see immediate results and feel that sense of accomplishment that “they built that.” 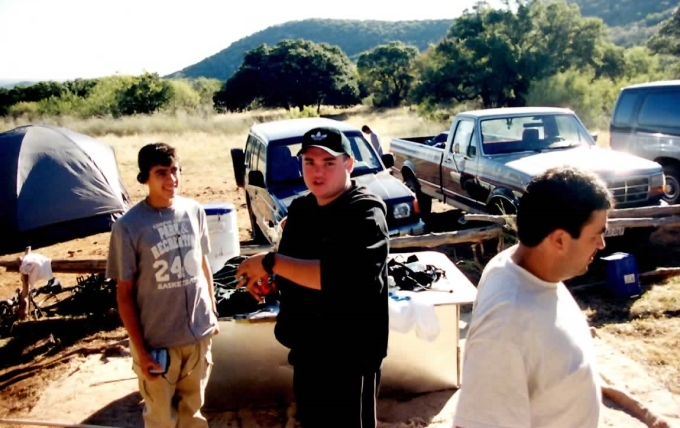 Chad in black at Kim’s ranch.

At this point someone mentioned how there were no fires in the rain and they discussed how, occasionally, they would encounter some bad weather and rain and have to pack up and head home early. At first it seemed like a let-down Chad said, but then “it was kind of neat because we’d stop somewhere along the way and eat at some cool local restaurant.” Which was fun because they always had the best food; and after getting soaking wet, a delicious meal is just what they wanted. Chad did note that “there was one trip they had to come back early from [not because of the weather but] because there were some kids that were pretty unruly, but it was just one trip [out of many so it wasn’t a regular occurrence].”

I mentioned how, the first Youth Odyssey trip I had gone on, we had to come home early due to attitude problems. Like Chad’s experience, it was only that one trip that was cut short.  But, speaking of kids, I ask Chad, if he had kids, would he put them into Youth Odyssey programs. Straight away he said “Oh Yeah,Definitely.” He continued with “The biggest thing I remember taking away was the Leave-No-Trace ethics while camping [they helped me gain more of an appreciation for the outdoors]. It would also be great because, kids nowadays never really get the opportunity to get out and experience being with nature and I think it’s essential to being a kid. Especially now because everyone is so separated with technology and phones.” Both Kim and I couldn’t agree more. I mentioned how, when the Youth Odyssey group arrives at the campsite, we take the kids phones away for a tech-free weekend so they can focus on making new connections with other participants and nature, distraction free.

I guess since we were discussing children, it made Chad inquire about how Kim’s kids were doing. He knew all of their names and was genuinely interested in what they were up to these days. I was impressed with his recollection of names and hobbies and Chad said, “I actually lived with Kim for a while and helped watch his kids. I was like an Au Pair of sorts.” They exchanged stories of some of the shenanigans they’d gotten into when they were all younger. One was about one of Kim’s daughters who used to wear pant suits to high school and another story about how one of the kids got locked out of the house.

It was an unexpected surprise for me to know, that this guy (Chad), I had come across randomly, was a youth participant from 17 years ago. But, furthermore, he and the founder of Youth Odyssey, were so involved in each others’ lives back then. 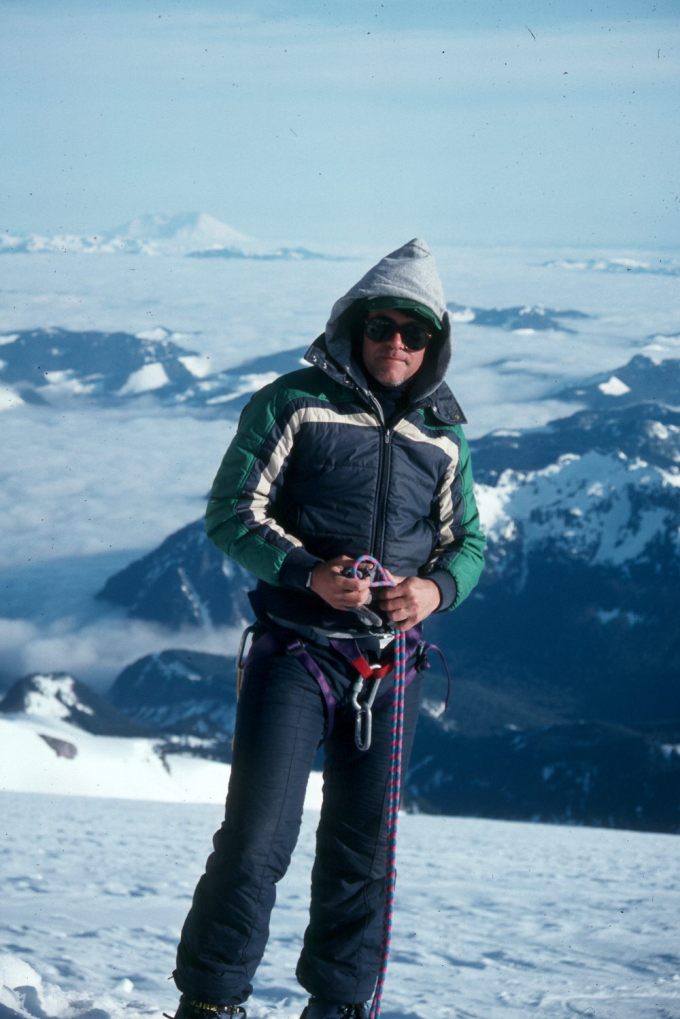 Kim on top of Mt. McKinley.

After that they started talking about everything under the sun, like old buddies catching up. Kim told a story of how he was training in Alaska to climb Mt. McKinley (now Denali) and did a trail race that he wasn’t exactly prepared for and expressed how crazy the trail obstacles were and how cold it was. Chad talked about a mud run he had been in and I mentioned a color run I had done. We all continued to exchange stories of crazy races we were involved in. I found out, during my research that Youth Odyssey used to host an Adventure Race annually right here in Corpus. It was an adventure endurance race with running, kayaking and biking portions. It was a lot of work to host it and the attendance wasn’t as good as it could have been so, after about three years of trying to get it to take off, they decided to bench the idea until a later time. (I’d love to see this reemerge, personally). We all exchanged camping trip stories as well, which segued into Chad and Kim reminiscing about old participants and leaders; and  what they were up to now. As well as what the other had been up to for the past 17 years.

It’s clear that Chad loved Youth Odyssey and is excited it’s still around and doing great things. So I asked if he ever thought of becoming a volunteer for Youth Odyssey. Without any hesitation he stated “Yes.” Chad said “he’d love to go and see how things are now, to compare and contrast”. As I discussed some of what becoming a volunteer would entail he had a smile on his face the whole time and said “It would be like a mini vacation for me [since I love camping and being outdoors].” Kim chimed in with “make sure you bring that guitar of yours along. That was awesome when we’d all hang out around the fire and just rock out with the guitars.”

As the interview was coming to a close Kim stated that he and Chad “should [get together and catch up] more often” which warmed my heart and made think that this re-connection might be a permanent one. It also made me want to track down more former Youth Odyssey members and see what they are up to and how Youth Odyssey has impacted their lives.

It is my pleasure to say that, since the interview, Chad has filled out the volunteer application and turned it in, awaiting the next step!