REI wasn’t the only one who decided to opt outside this year for Thanksgiving break. Youth Odyssey chose to reward our youth mentors with a week-long trip to Palo Duro Canyon, the “Grand Canyon of Texas,” before the festivities began.

8:00 a.m. on Saturday, the 21st of November, we met up and loaded into our trusty Youth Odyssey van to start the nine or so hour drive to the Texas panhandle. In between naps, our mentors passed the time by rocking out to some pretty awesome mix CD’s and working together to try and get the highest score on their trivia games. 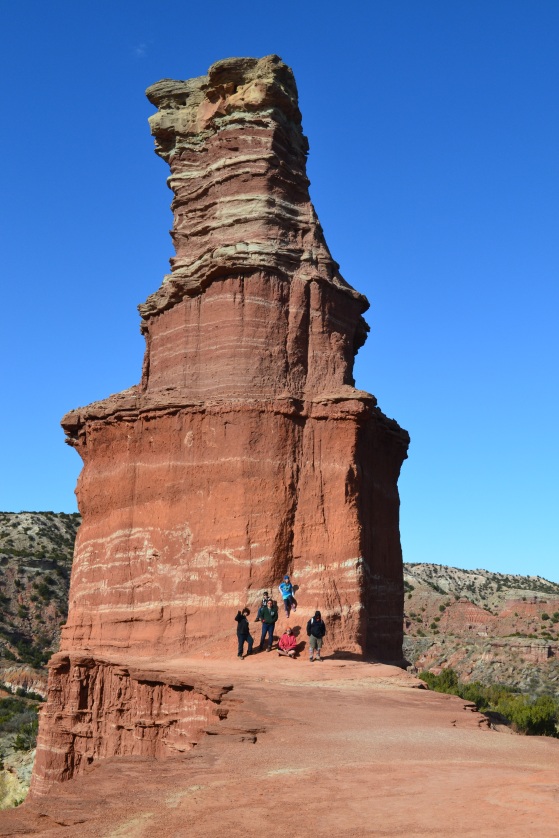 Our mentors posing in front of the Lighthouse.

We arrived at Palo Duro Canyon State Park after the sun had long left the sky and the temperatures had dipped well below 40 degrees. In order to stay warm, we stayed busy. We set up our tents with our sleeping bags and gear and went over some helpful tips so they could sleep comfortably during the cold nights ahead.

The mornings were very similar to the nights; everyone bundled up in their layers of clothes, trying to keep moving so they wouldn’t feel the cold as much (I think the hot coco helped too), half of the group would prepare breakfast while the other half would prepare lunches for everyone. Each night, the group would vote and decide who would be the leader and the navigator for the next day. Each morning, the two voted-on mentors would get up earlier than the rest of the group to delegate tasks and decide a game plan for the day.

The role of the “leader” is to keep everyone on task and attempt to structure a time efficient plan for the day’s activities. The role of “navigator” is to work with the leader to discuss possible hikes for the day, identify a good spot for lunch, use the maps to make sure the group was on the right path, and navigate while on the trail. Since we had six youth mentors attend the trip, we were able to have a different leader and navigator each day so everyone was able to utilize the leadership opportunities. 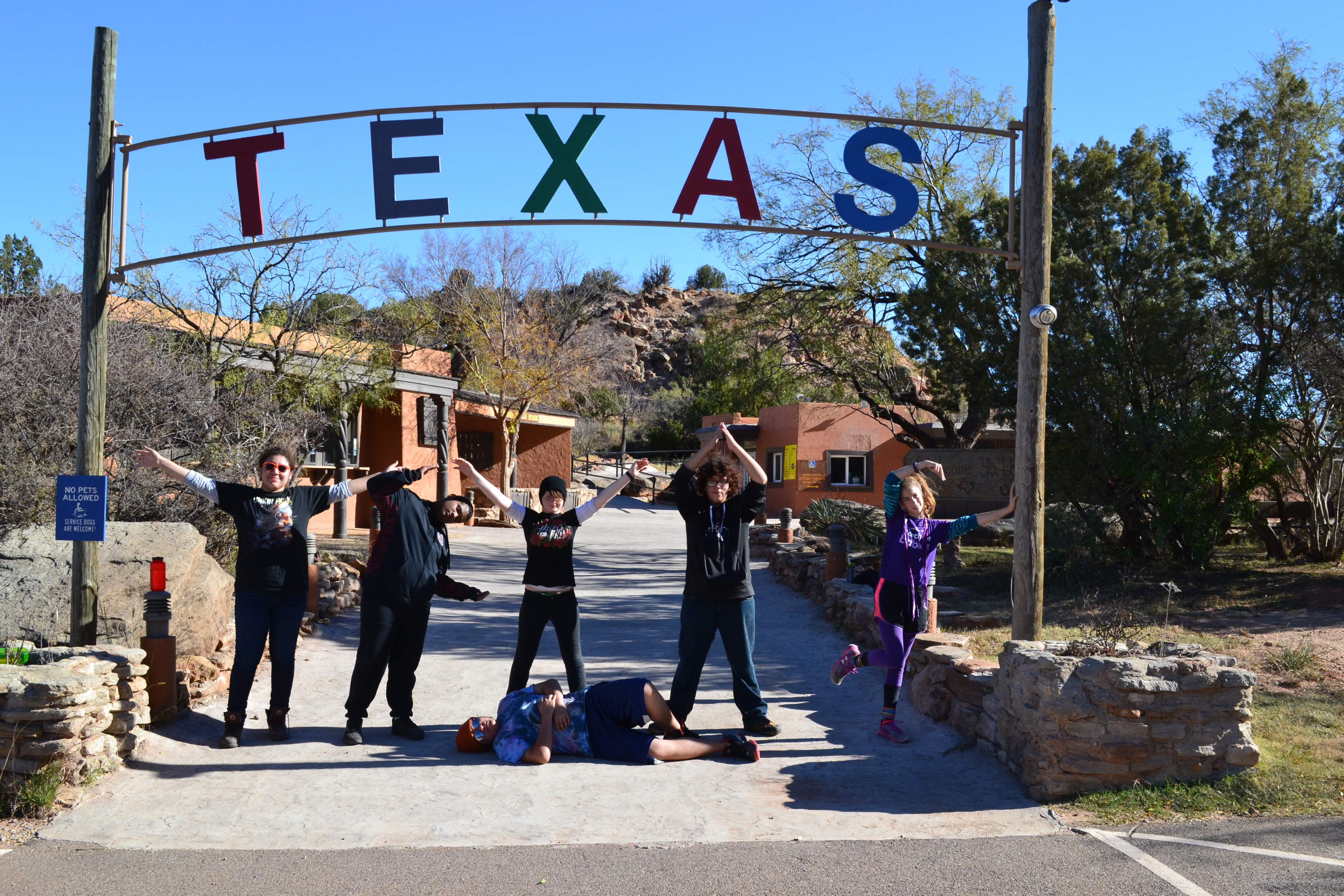 After cleaning up from breakfast and lunch preparation, the leader and navigator would fill everyone in on their plans for the day. Each day started out with a hike to one of the many scenic points that Palo Duro Canyon has to offer. The first day we were able to explore numerous trails that took us all over the canyon bottom and to Big Cave. Admittedly, Big Cave wasn’t exactly located correctly on the map but we were able to find it by using the map and a different route, because we  knew the coordinates. Once we found the Big Cave, we decided to sit back and enjoy our lunches before doing a bit of spelunking (cave exploration). On the second day, our leader and navigator chose to hike to the Lighthouse, a large rock formation that is used as a sort of mascot for Palo Duro Canyon. As we hiked we were able to see landmark rock formations like the Sitting Indian and the Tug Boat. There were a few, more difficult, portions of the hike as we approached the Lighthouse but it was definitely worth it. The views were spectacular and the mentors took full advantage of it by posing for numerous photo opportunities with the Lighthouse. Seeing as how the past couple of days were pretty jam packed with activities, on our last full day at Palo Duro, the leader and navigator chose to do a few shorter hikes so they would be able to relax a little bit. They also accounted for time to check out the visitor’s center, where the leader was able to find Youth Odyssey’s 2014 sign-in in the visitor’s book from last year’s mentor trip to Palo Duro. We were also able to souvenir shop and played games back at camp before we had to get supper started. 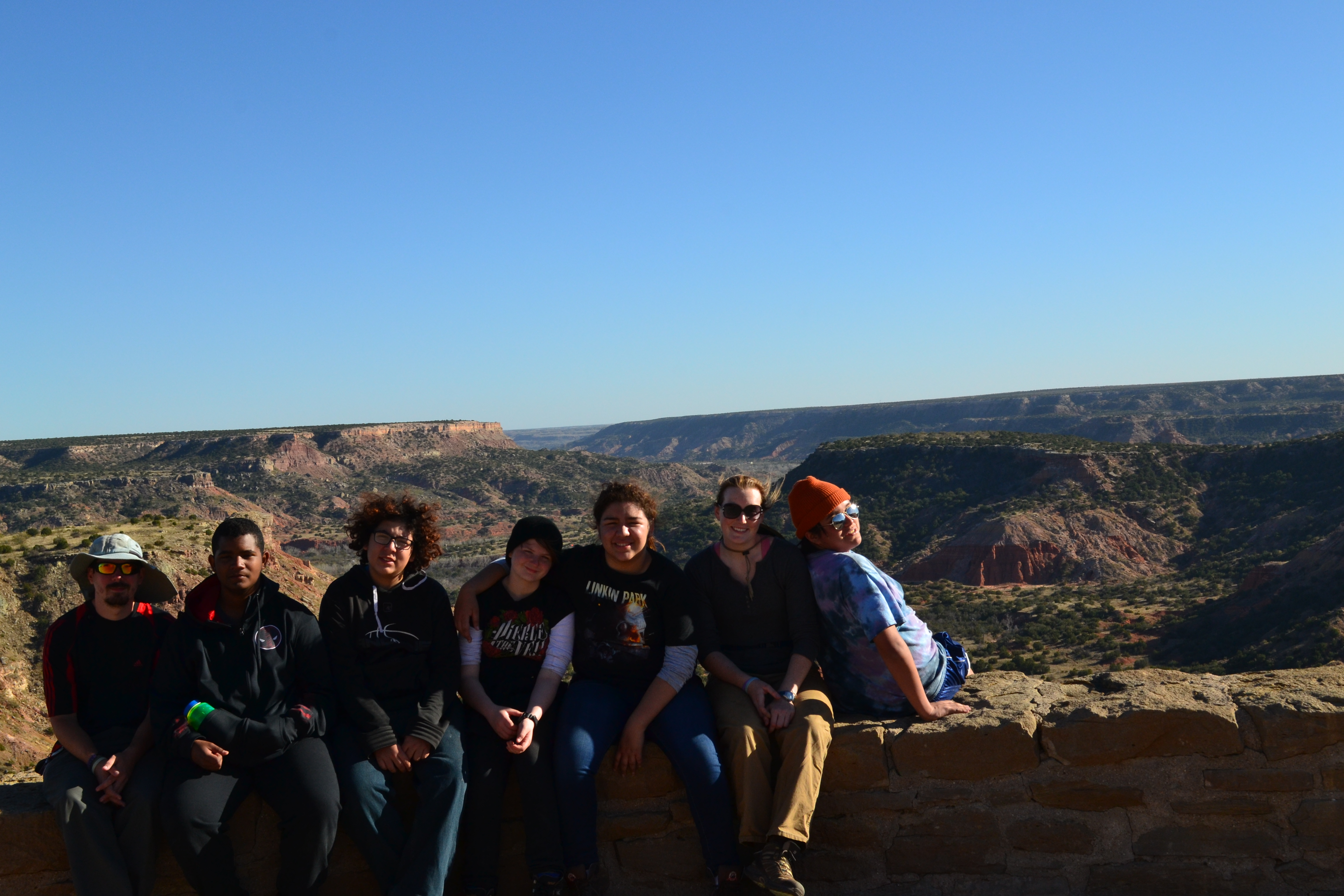 At the overlook near the Visitor’s Center.

Since we needed to get up at 5:00 a.m. the next morning, we chose to pack up the night before; so all that needed to be taken care of in the morning was putting away the tents and everyone’s personal gear. Despite it still being dark outside and quite cold, we were able to get packed up quickly and were on the road by 6:00 a.m. to head home for the Thanksgiving festivities. Understandably so, the ride back to Corpus Christi was much quieter than the ride to Palo Duro since they had all had a very full and exciting week.

Our youth mentors worked great with one another and showed teamwork in accomplishing tasks, leadership in the day to day flow of things, they communicated with one another when things were going well and also when they needed to work out issues, they maintained positive attitudes even though some of the hikes were long and the trails were more difficult and, because of all of their hard work, we were able to have an amazing trip to Palo Duro Canyon State Park. 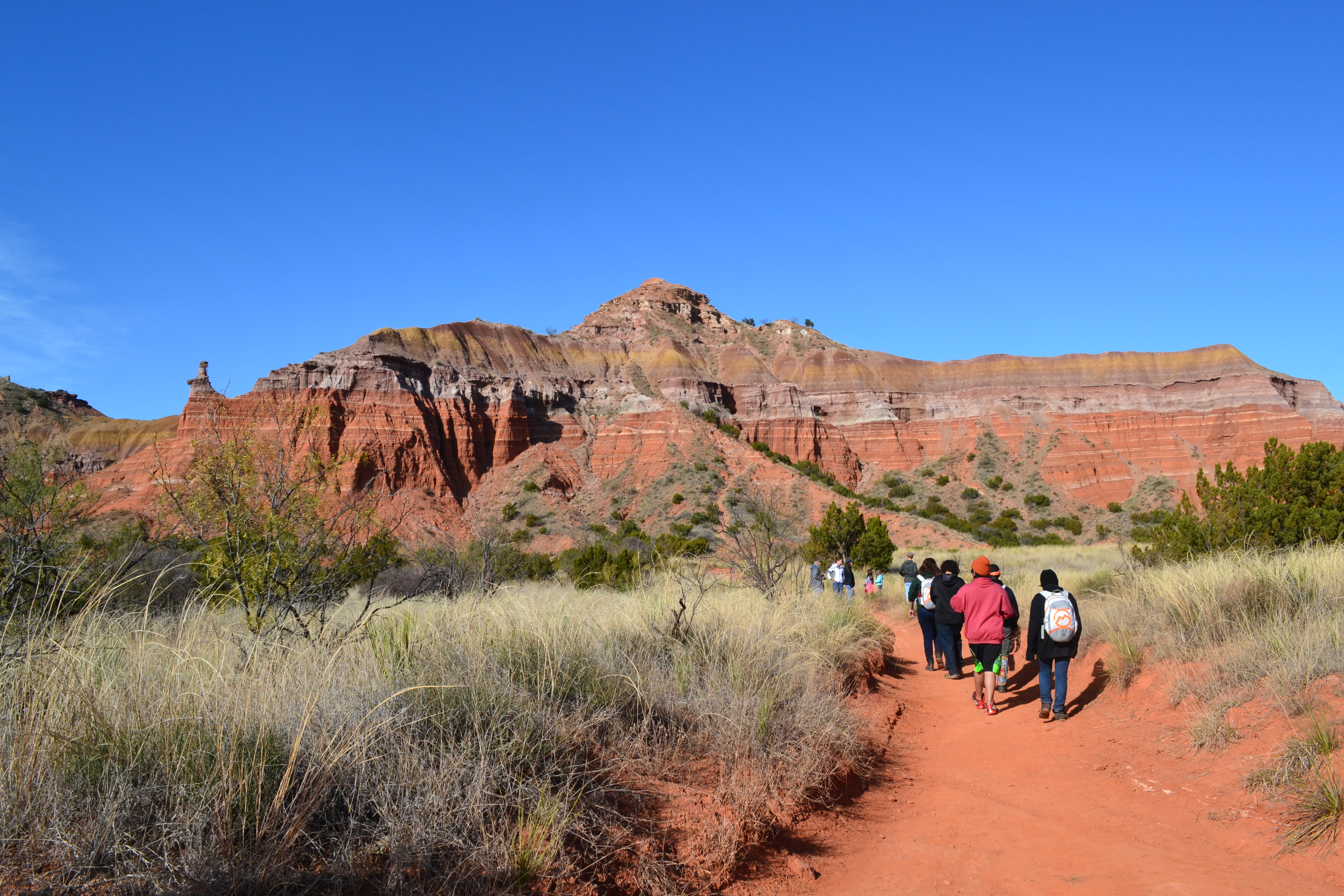 Hiking along the bottom of Palo Duro Canyon with the Sitting Indian on the far left.